The company specializes in the following areas:

Photos of Various Phases of Project 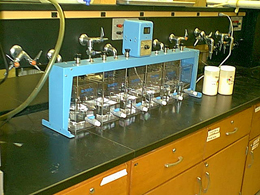 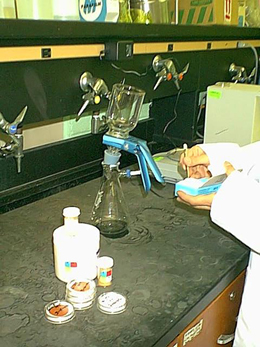 Samples were then filtered preserved with acid, digested and analyzed for Arsenic using a Graphite Furnace. 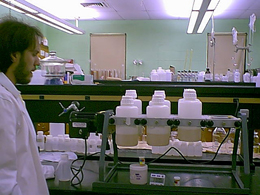 Because mixing did NOT provide adequate contact with the material 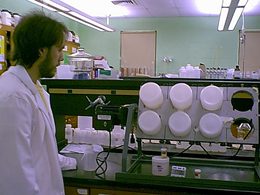 As part of the Kinetics Experiments, the seven materials were evaluated by exposing a controlled amount of the material to a known mass of arsenic. Subsamples were collected at the following time intervals: 1 minute, 15 minutes, 30 minutes, 2 hours, 4 hours, 8 hours, and 24 hours. 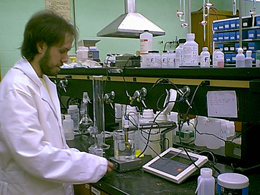 As part of the project, the pH / mv of the test solution was monitored prior to starting the testing and during each sampling. A series of samples were tested under a variety of solution pH. 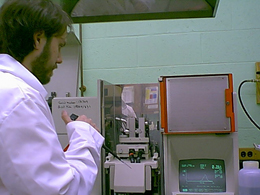 After preservation and digestion the samples were analyzed by Graphite Furnace Atomic Absorption. During the analysis, known QC/QA samples were evaluated to evaluate the accuracy and percision of the data.

A preliminary summary report has been submitted by the team to Mrs. Valerie Bell, Engelhard Project Researcher. The laboratory technician in the photos is Mr. John Pagoda.

He was a research assistant and consultant working with the Center for Environmental Quality at Wilkes University.

We are in the process of setting up Face-to-Face Courses.  They will be posted here at our New Training Portal - Training Professionals Online Training Courses.  We will be scheduling courses in soil science, soil morphology, hydric soils, and water sampling.

New Training Portal Launched - Training Professionals
Udemy Featured Courses - 30,000+ Self-Enrichment Courses
Continuing Education for Engineers and Related Professionals (PDH)
More Training Courses
Continuing Education Courses (Multi-State Approval) for Licensed Professionals
Keep in mind we may receive a commission for purchases made through these links. The companies we partner with, and the products we recommend have been selected for their quality. If you purchase a course, please share your experience so that we continue to recommend the best products possible. Feedback